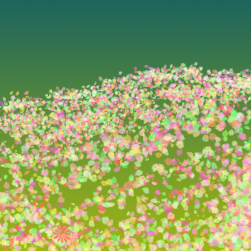 Few days ago,
when Ivan went to a trek, he came to know about an incident which was narrated to him by a local.

A group of college friends had come to the same place for a one day trek. Everyone was eager to see the view from the mountain top.

All the students started walking quickly to reach the top except one. Soon, the other students went ahead of this boy. He was walking merrily at his own pace. After some time everyone reached the top. Some locals who were present there asked whether they had seen the valley of flowers. One of the boys replied, “There was no such valley on our way. What are you talking about?” The boy who arrived later said that it was the most beautiful thing he had ever experienced.