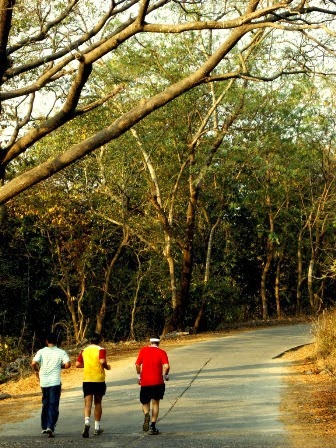 The clock said five. One fine evening 10 guys were seen running on a parched road.

They ran for miles, one behind another.

Some more time passed before the last two runners became weary.
The last one asked, “Why are we running?”
The 9th one said, “May be there’s a prize at the end. Why did you get in?”
“Because I saw you 9 guys running” said the last one.

The question passed to the second one. “I want to be 2nd in the race” replied he.
“Which race are you talking about?” asked the first one as they were the only two who continued to run.

“Is there no race,you mean, no prize? Why are you running?” asked the stunned second.
“Because I like to,everyday” said the lead as he continued. The second one stopped and sat on a bench nearby.
Therein came a smart looking man who had heard the conversation. He asked, “You look well built like an athlete. Do you want to run the mega-marathon tomorrow? Be here at five. Here are the passes - only Rupees Fifty.”
The flattered guy bought one.