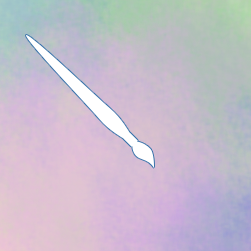 Varun was a government servant. Obedient but disinterested.

Poor financial conditions led him to accept whatever came his way. Today, there was nothing more he asked from life. His family would let him pursue his hobby—after they went to bed.

He wanted to live as a painter, an artist. Many years of nocturnal painting added more to the little space his 1-room home could offer— he had to eventually stop painting. Now he continued to paint in his mind.
They could not understand why he went out at times carrying his framed canvas paintings and come home overjoyed. They were cold about what he worked on except for the event which happened after some trips with his paintings: they got some cash to buy things of their choice.

As age progressed he retired from work and one morning breathed his last. Weeks later his son found unread letters along with newspaper clippings, lying in a briefcase on the attic while cleaning it, dumped there after Varun passed away. All letters read to the effect, “Please collect the cheque for your sold paintings at the Gallery Office by…”
His family was proud of him.