Disclaimer: This account is my personal experience and the views expressed may differ from other attendees’ at the festival.

Having managed to keep myself from diving deep into literature or arts festivals for few years for silly reasons, I couldn’t resist myself from attending the Tata Lit Live 2015 at NCPA, the Sixth Mumbai International Literary Festival.

The first workshop I attended was Robert Sullivan’s “Crossing the threshold of a poem: Translating emotion into words.” Robert currently teaches a popular creative writing class at MIT's MSVA Campus. You can read more about him here: https://en.wikipedia.org/wiki/Robert_Sullivan_(poet) 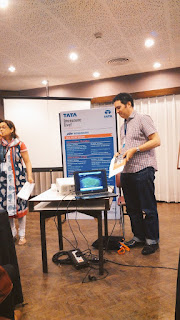 Robert was really a cool guy, great listener and really sensitive person. Of course how could he be a poet if not sensitive? When you observe a person doing mundane things like lifting a cup of tea with great care, I know it may seem nothing extraordinary, but the feeling of being at ease and warmth is rare to see these days even in artists. That’s what was special about Robert.

“Breathe life into the poem” he said during the workshop where it seemed we were crossing thresholds all the time between the concrete and the abstract, between surreal emotions and reality like the motion of waves moving between back and forth. 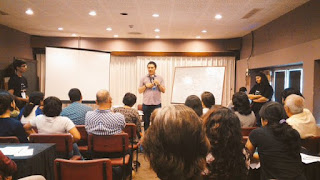 The group exercises really made the workshop great fun. I connected with many poets, younger and older, especially with Sumithra and Chintan. Sumithra unfortunately didn’t have a Twitter handle so that we could connect after the workshop. No it’s not what you are trying to guess! She was really cool and one of the very few grandmothers who attended the workshop. Her poems had that warmth & simplicity which I often find when I’m having a conversation with my mother. I’m sure you experience it too. But I missed out noting down her email address.

Are you reading this, Sumithra? I’m that bearded guy whose poem “Bono” you loved.

Here’s the poem for you.

Words were scarce
feelings choking me
frustrated I tore off
page after page.

It was the night
I wept like rain
when died Bono
the dog I loved.

At last it came
my first poem
as I felt Bono
licking my feet. 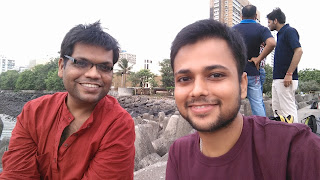 And there was Chintan Modi, the unpretentious, humble guy, who even after working big names I am a fan of including Padma Shri Prahlad Singh Tipaniya, Linda Hess, MooraLala Fafal, Shabnam Virmani of the Kabir Project to name a few, was kind to listen to a seeker of literature like me. He is also the founder of FriendshipsXBorders (Twitter: @aaodostikarein) which bridges the distance b/w Indians & Pakistanis through peace education, story sharing, workshops & social media.

After this workshop we had a chai at Nariman point, one of the farthest ends of the city. In an hour of casual chat, we ended up talking from Kumar Gandharva, his music, the Kabir Project, Vikas Amte to our experiences about stories, literature and a lot in between.

Imagine colourful threads of conversation actually floating in the air between you and your friend. This was exactly how I felt that evening. 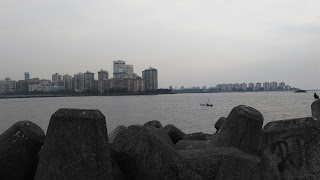 After a short walk on the Marine Drive promenade, and discussing his plans for a PhD from UC Berkeley we returned to Tata Theatre, NCPA, eager to listen to the elegant poet prince, Vikram Seth who was to be awarded the Poet Laureate Award. 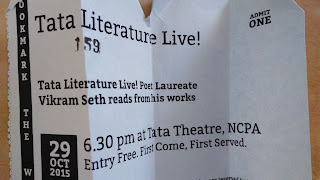 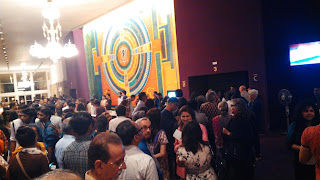 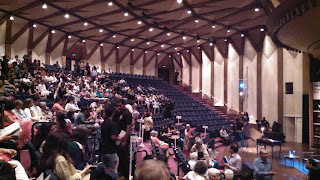 It really felt good to see the elite & celebrities mingle freely with many newbies like me. It was the first time I was hearing Vikram Seth. Making fun of the turf wars between literature fest organisers in the country, which he compared to the Game of Thrones, he read out a humorous poem on the slight probable animosity between them.

Among the other poems he read my most favourite was The frog and the nightingale. Ignoring the constantly buzzing cell phones in the audience, he couldn’t bear it anymore when he was about to read the unpublished poem written on his Papa’s 90th birthday. The silence that grew deeper in the theatre as he read out the poem finally merged into a thundering applause which seemed as if it would never stop.

After managing to find my way through the city’s ever-growing traffic and unreliable local trains, I reached a bit late for the conversation at Experimental Theatre, NCPA. It was between Rohan Murthy (or should I call him Dr. Rohan Murthy?) and Anil Dharker.

The mood of the conversation swayed between emotional and intellectual as they talked about poetry, arts, mathematics and computer science. The conversation centered around reviving our classics and Murty Classical Library of India (http://www.murtylibrary.com/), Rohan’s initiative for the same. It feels really proud to see someone from our generation not only think about it, but actually do something concrete.

"These books are time machines."

"Classics are a product of human consciousness."

So is that all he does? No, he is a passionate computer scientist. Read more about him here.

To sum it up, it was a passionate conversation between a humble, passionate guy and the strong witty Mr. Dharker.

After this I managed to grab a cup of coffee and catch this snap of Carved Chinese Ivory Caskets of 20th Century (cool ain’t it?) before attending the “Drawn to it: Graphic Novels and the modern society” a panel discussion between Arjun Gaind, the graphic author from India and Rutu Modan, the Israeli illustrator and comic book artist. (read more: https://en.wikipedia.org/wiki/Rutu_Modan) 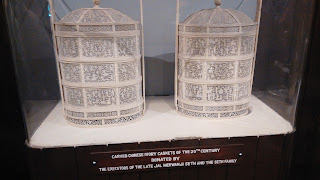 This discussion reminded me of my caricature done by an ex-colleague, Pranay, over a year ago. 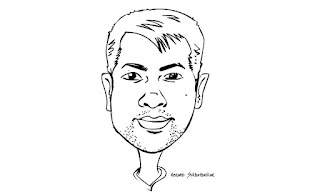 What struck a chord with me about Rutu was the simplicity and direct way in which she spoke. Hats off to Rutu for creating a wave of graphic novels in Israel, which had no such culture previously.

“No time for Silence: Why writers feel the need to speak up” was the next panel discussion at the Little Theatre.

T.M. Krishna (a.k.a TMK) the famous carnatic vocalist struck a chord with everyone with his clarity of thoughts. To me, the well known Indian writer in English, Nayantara Sahgal at 88 years of age, felt like a wise granny, although she didn’t look her age.

“The only way to teach is through being an example”, she said.

It was one of most beautiful and harmonious conversations I saw among two artists.