on December 11, 2016
The American writer and critic Edmund Wilson said,

"No two persons ever read the same book."

So true, Mr. Wilson! Readers find their own special story in each and every page they read.

Won't it be awesome to hear a passage from The Last Nomad in your voice? Let's prove Mr. Wilson right. 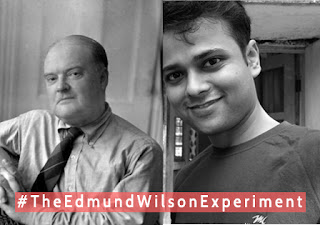 Start here.
Like TheLastNomad page to know the results of the experiment.
I'm eagerly waiting to receive your story.

Here are your passages:

#01 'Fear'
Many months passed until one day the boulder surprisingly dislodged and the cave was flooded with light. The cave had been very well explored and exploited by these nomads who had become adapted to staying in darkness. Having lost contact with the world outside, dominated and hypnotised by their ruler who was just another nomad, they were afraid of going outside the cave.
Millions of years have passed and descendants of these nomads are still afraid to enter the world outside. They are toiling in deep darkness, scraping the soil and rocks, in search of an eternal source of light, like the light which is already present one step outside the cave.

#02 'When power's at stake'
Elections were the only time when residents, who were otherwise subdued, would be pampered. The goodies to entice had been carefully chosen to garner votes: men with chicken biryani and booze, women with fancy garments and ten rupees and teenagers with a good supply of bidis – cheap leaf-wrapped tobacco cigarettes – and packets of tobacco snuff. Sometimes when the stakes for the Liberals and SOS men were high, the men would be entertained in makeshift theatres to c-grade films like ‘Hawas ka Junoon’ and ‘Chudel ka Tashan’.

#03 'Falling in Love once again'
As if he was breathing after a long time, Shankar took a deep breath standing in the warm evening sand of the Devbag beach, closing his eyes with arms spread wide. Laxmi came and snuggled close from behind him rubbing her face on his toned back. The serene beach showing no slightest trace of humans was unbelievably calm. Being with Laxmi in such endearing silence, away from all the noise Shantinagar could offer them, was an invitation to fall in love all again.
‘Ready for the second honeymoon?’ he said turning around and planting a small kiss on her forehead. Her hair bun was all decked up with white jasmine garland.
‘No! My two small kids have already become quite uncontrollable. No more children,’ she said playfully, running away from him as he caught her within some distance and swung her midway in the air in circles until she begged him to stop.

When we do not have much to say
Words are plenty

When there is lot to express
They leave us scarce

‘Where had you been Ryan?’ said Saki moved by his words.

‘What happened exactly when you were with him? Did you see him flying... or did he produce some... some sacred ash out of thin air or at least a gold chain?’ she asked with childlike wonder.

Ryan’s laughter echoed in the drawing room. How eager are we humans to hear, know and talk about miracles, he thought to himself.

‘I saw more, Saki’ said Ryan with a mischievous smile Saki couldn't ignore. No matter how much she had convinced herself of having forgotten the old memories, she could still feel the same for him as during their last trip to Mount Rokko.

‘Tell me, I’m all ears.’ She turned a deaf ear to her racing heartbeats.

#06 'The First Glance.'
That day at the library Ryan was searching through the catalogue in vain, stealing glances at the assistant. No matter what, today I must speak to her, he thought trying to boost his own morale.
Not knowing what to say next, he tapped at the desk with his pen trying to catch her attention. It being lunch time half of the library seemed empty. ‘This is the right moment Ryan,’ he thought aloud hating the self talk.
With closed eyes she was gently swaying to some song from the mp3 player. She opened her eyes only when disturbed by his second tapping. Embarrassed, she quickly pulled out the earphones seeing a boy gazing at her across the desk and held his hands assuming he was carrying a book to return.

#07  'Ruthless Control'
‘Really?’ Dinanath couldn’t believe that corporator Joshi still cared about him after the elections.
‘How can I forget you? I know you have offered sweat and blood for the party.’ Dinanath, who had begun to sink in fantasy, suddenly became alert with the last remark.
‘One month.’ Mr. Joshi spun the paper weight again as Dinanath got up from his chair.
‘And don’t even imagine anything about ASC and Deobhankar.’ The paperweight whirled briefly before losing its grace and coming to an abrupt halt.

#08 'Women'
‘What do you want me to play?’ asked Rebecca opening the violin case.
Being a street musician, she was used to variety of responses from people: catcalls, appreciation, hatred and nasty suggestive looks. But she was surprised by Ryan’s strange demand – he wanted her to play solely for him the whole night. And her first thought was, he must either be a psychopath or a heartbroken lover.
‘Sometimes I get a few unwelcome touches when I am engrossed in playing. But I know these men are more scared than me,’ she said talking about daily life.
‘Crazy thoughts don’t allow me to play; I feel why don’t these men come up and frankly say things to me? At least I will have company for the night.’
That evening when she saw Ryan, he was the only person listening to her on a blurred background of people rushing back home, having no time as usual. She could never understand when someone said, ‘I have no time’.  What in the world did they have time for except making money?

#09 'The Unknown'
‘Then Adinath started speaking, “Even if you miss living, the only reality which no one can escape is death. It marks the end of grand plans we are always making about life. What lies after death is beyond imagination – we as we know ourselves come to an end.”
‘I pleaded forgiveness but he was calm and composed. “One who can regain sanity after watching death so closely and still do all that life asks of him has gained something within. For him there is no need of any occult powers because there is no one left in him; it is the death of the old him,” saying thus he walked out of the ground. The pyre was rapidly turning into ashes.