An illustrated excerpt from The Last Nomad 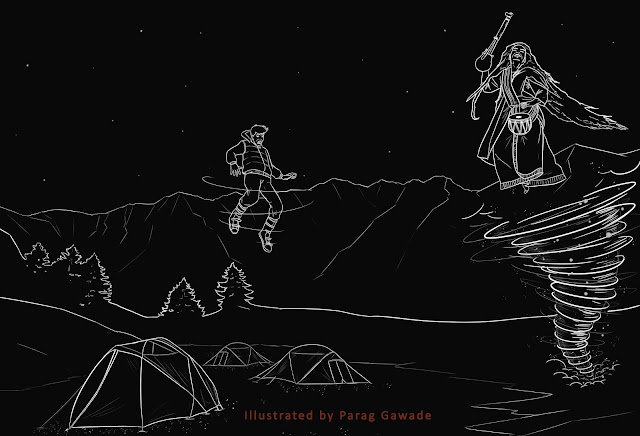 Note: This novella is not an illustrated work.

It was their last night at the camp. Ryan woke up with a jolt, only to see Saki sleeping peacefully. It was one of those nightmares that occurred when Ryan was staying in Bombay (now Mumbai) with Deven and Mishraji.
He came out of the tent, feeling uneasy. At some distance, Macy’s friends were sitting around a bonfire. Oddly enough, the light from the stars shimmering that night wasn’t adequate to see the rest of the camp.
And suddenly, the bonfire went out after few streaks of lightning came down from the sky, followed by a loud rumbling sound. Before Ryan could realise anything, the land beneath his feet felt pulled away like a carpet and he was tossed into the air. Some tremendous force kept pushing and rolling him forward at a great speed.
All Ryan could see while being strongly whirled were strange objects illuminated by frequent streaks of lightning. Suddenly, he was sucked into deep silence. He heard a feeble ektara strumming in the background. Ramaa appeared, swirling mid-air, with matted tresses let loose, singing Jonomo Morono in her haunting voice. Then he felt his breath stop.
Get your copy today!
Paperback
Kindle Store (e-book): amzn.to/2oP7OJ1


The Last Nomad has been reviewed on:


Visit the Webstore to discover some interesting books