The Zen Master Who Walked on Water [Story] 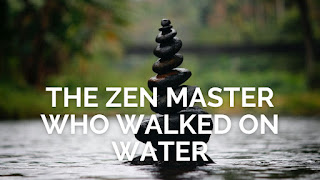 Once upon a time, two young monks set out in search of a Zen master. The master, living few villages away, was known to have mystical powers. He could walk on water, fly above the clouds and even turn into thin air at will.
The young monks wanted to become someone special by achieving the state of enlightenment. When they reached the old master's hut on top of the hill, they were tired and frustrated. The road was rocky and the climb too steep. They wondered how the old master would travel up and down everyday.
Not wanting to waste more time, they approached the master and told him about their quest. The master replied that as he was to leave on his secret sojourn, they will have to wait for 12 years to learn something from him. One of the monks was irritated on hearing that. He immediately took his baggage and left. As the old master left, the other monk, who was wondering what he should do next, decided to wait at the hill for a couple of days.
The monk would do his daily chores, beg for food in the village, and come back at the hill. One day, seeing a lake from the hill, he desired of having the power to walk on water. Three years had passed by but there was no sign of the master's return. Was he really going to take 12 years to return? he wondered and tried to encourage himself to wait there.
One day, as he had gone down the hill to fetch some water, the monk saw a couple of village men moving strange wooden objects on the lake. He could not control his curiosity. The village men replied that these objects can be used to move on water. The young monk was thrilled and within a few hours learnt how to use them.
When the old master returned after 12 years, he saw that the young monk had dropped his quest to walk on the water surface while the second monk had seen more than 10 masters and was still clueless about how he could walk on water.
Many a times, we do not find answers to all our questions. No matter how hard we strive, there seems to be no way out. But as time goes by, it turns out that the question we posed was not ours but simply a distraction.
Listen to the audio version: https://youtu.be/JbGIIysz8L0
- The Last Nomad
Check out books from the Insight Stories webstore.